Blenko Glass is a West Virginia treasure that spans generations. Nothing symbolizes the state of West Virginia better or more beautifully than Blenko Glass. We will discuss current and former craftsmen and designers and how important it is that Blenko and West Virginia glass be appreciated and valued by the younger generation.

TAMMY FOWLER  - TROPHY ANTIQUES  of CHARLESTON  will continue to sell the STEVE BAIR COLLECTION OF BLENKO AND WEST VIRGINIA GLASS.

STEVE BAIR WAS AN FOUNDING MEMBER OF THE BLENKO COLLECTOR SOCIETY. PHOTOS OF HIS COLLECTION ARE ON THE www.blenkoproject.org website STEVE'S COLLECTION OF BLENKO AND WEST VIRGINIA GLASS IS ONE OF THE BEST IN  WEST VIRGINIA AND IF WELL KNOW IN AMERICAN  GLASS CIRCLES.  STEVE IS AN ARTIST AND HIS COLLECTION HAS EXQUISITE UNIQUITE ONE OF A KIND ITEMS.

IF YOU HAVEN"T SEEN HIS COLLECTION YOU"LL WANT TO VISIT TROPHY ANTIQUES AND IF ITS POSSIBLE AND YOU HAVE THE MEANS FOR YOU TO ACQUIRE ITEMS FOR YOUR OWN COLLECTION  THESE OPPORTUNITES ARE LIMITED.

Posted by Heart of Glass at 2:15 PM No comments:

The Line Begins very early... ..... If you aren't In Milton....Should you be?
Well....  Rumor has it....that  you are most often safe...as long as you
arrive BEFORE
MIDNIGHT
and sometime you are SAFE even if you arrive
at 6 am on SATURDAY
but many people have been disappointed
and left without a Blenko Birthday Vase
when they arrived late.
IF you arrive late and don't get a vase

you can purchase a vase on EBAY for an upcharge of $100
most often the day after....fyi.

BUT the fun is standing in line....getting to know other BLENKO COLLECTORS listening to the stories of   the old timers....the folks who collected when the sale was in the downtown area - first at
THE DIAMOND....then At Stones'
Then at The Cultural Center
Then.....
well you get....This Blenko Birthday Vase is nearly an OLD LADY -  she was born in 1980!   The first Vases were crystal - and made by Sheperd only later did the designers add color.

Posted by Heart of Glass at 2:09 PM No comments:

Blenko at Bahnhof WVrsthaus and Biergarten

Driving in Huntington this weekend we unexpectedly spotted Blenko glass.
Of course we stopped to check it out, and ended up having lunch at a wonderful new restaurant in the Huntington area. 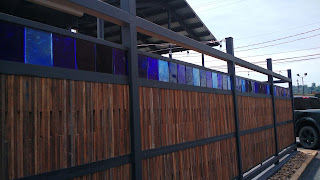 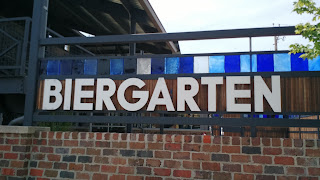 Bahnhof WVrsthaus and Biergarten, 747 7th Ave., Huntington, WV
The wood inside and out was imported from Germany, and the glass blocks are Blenko Glass.
We had the 'Sausage Party' platter and it was delicious. 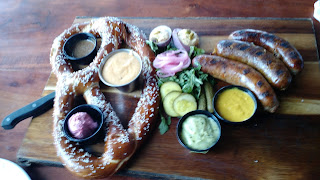 Everything is housemade- they grind and case their own sausages and make all the sauces and dips.


There are also more than 30 different brews on tap.
You can read the full Huntington Herald review here:


http://www.herald-dispatch.com/features_entertainment/dining_guide/bahnhof-brings-german-inspired-comfort-food-brews/article_1fae9692-29a5-58c2-a5f5-23288e1cc486.html
Posted by Heart of Glass at 9:00 AM No comments:


Inspired by the mountains and rolling hills of our beautiful state of West Virginia, the base of this 13.5’’ tall Cobalt, Clover & Crystal creation known as “Sun Over The Mountains” is emboldened with a variety of ingrained lines meant to emulate the curvature of our states hills and mountains. The piece is finished with a round Yellow stopper representing the sun.
This is the 1st West Virginia Day Piece designed by Blenko’s newest designer, Aaron Harvey.
This year's birthday piece, will go on sale Saturday, June 17. The doors will open at 8am, get in line early so you don't miss your chance to own one of these rare and beautiful pieces!. Each piece will be numbered and signed by Blenko President, Walter Blenko Jr. as well as the West Virginia Piece Designer, Aaron Harvey.
-Only 154 of these available.  -$154.00 each plus tax  -Limit 1 per person, No advance orders,  -No phone orders, No coupons, No gift certificates.  -Each Piece numbered & signed by Walter Blenko, Jr. & Aaron Harvey 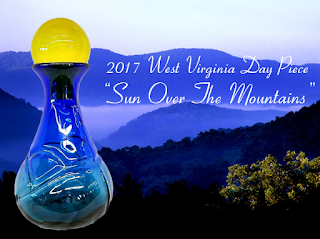 Designed by Aaron Harvey to continue to pay homage to the outdoors; “Moon Over The Forest” is a 12 ¼” tall form blown in Cobalt and finished with a White powdered frit stopper to represent the moon. Item will be available as a Pre-Event piece during our “After Hours” Event on Friday, June 16 from 7pm to 9pm. Item will also be available online at shop.blenko.com starting Saturday, June 17.  Each decanter will be $79.00 and will be etched WV Day and Blenko 2017 on the bottom. Limited Quantities Available 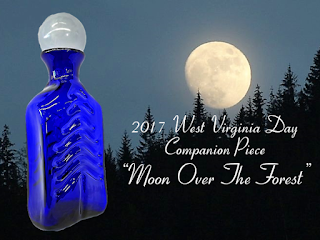 Posted by Heart of Glass at 4:39 PM No comments: